Udaariyaan Written Update Today 29th October: Udaariyaan serial is the story of two sisters – Jasmine and Tejo from a small pind in Punjab, and the dashing village boy Fateh. Jasmine and her family have only one dream, and that is to go to Canada and settle down there. 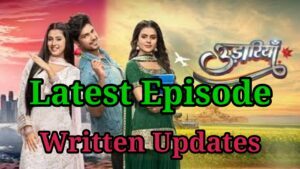 Udaariyaan 29th October 2021 Written Update Angad’s entry Tejo feels bad seeing Jasmin disrespecting Karwachauth rituals and faking to keep the fast in front of Virk family. She realizes that Jasmin doesn’t care for Fateh’s hunger since she made him keep the fast as well.

She was really thinking that Jasmin will keep the fast for Fateh’s long life and happiness, but she forgot for a moment that Jasmin is really selfish. Jasmin’s lie gets caught by Tejo, Simran and Mahi. Mahi makes a video to show it to Fateh and family, and expose Jasmin’s lie. Tejo wants Fateh’s eyes to open up.

Tejo plans to have Simran and Buzo’s Karwachauth celebrated in the Virk house. She convinces Gurpreet to support them. While Tejo carries a Karwachauth rasam plate with her, she bumps into Fateh and drops the plate. Fateh helps her pick the Karwachauth puja items.

He gets to see Tejo’s face through the Channi/round mesh, while Tejo also sees his face through it, just after sighting the moon. Fateh and Tejo are still husband and wife, after getting rid of fraud Jass. The fate brings them together on Karwa chauth.

Virk family will be seen celebrating Diwali festival together. Angad Maan’s entry will be happening during the celebrations. He will be entering Tejo’s life. A joyful, handsome and true Punjabi guy who loves his country, and having principles matching to Tejo will be seen winning her heart. Angad and Tejo’s pairing leaves Fateh jealous.

Angad’s entry will revive Fateh’s unfelt emotions for Tejo. Jasmin wants to announce her engagement with Fateh in the same function. She decides to manipulate Fateh and convince him for the engagement. Fateh wants Tejo to move on, but his heart doesn’t wish the same.