KumKum Bhagya Written Update: Kumkum Bhagya is a love story of Pragya and Abhi who are destined to be together against all odds. The series started as the story of sisters Pragya and Bulbul, and their mother Sarla Arora’s hope to see them married.

Later, the show revolved around Abhi and Pragya. The couple later have a daughter Kiara. Seven years later, Pragya bears twin daughters whilst Kiara is killed by enemies. Pragya and Abhi are heartbroken and blame each other for their daughter’s death and separate, with Pragya taking one twin whilst Abhi keeps the other. 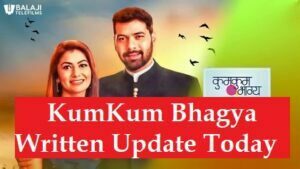 Abhi’s bail appeal gets rejected, and Pragya tries to procure evidence using other means. She confronts the contractor, which leaves him flustered. When Pallavi praises Prachi, it perturbs Rhea.

In the previous episode of Kumkum Bhagya, the police arrive at Pragya’s house and inform Abhi that he is getting arrested on the account of six murders. The inspector explains that the renovations authorised by Abhi led to a collapse of a wall, killing six people.

Pragya comes to Abhi’s defence and calls the contractor, who continues to insist that Abhi approved the plans despite his warnings. After which, the inspector arrests Abhi. It gets revealed that the contractor lied to the police at Gaurav’s behest.

A furious Pragya confronts Alia and Tanu and vows to throw them out of Abhi’s life. Suspecting that Gaurav is behind everything, Alia leaves the house, while Gaurav calls Pragya and offers to extend help. Pragya arrives at the police station and expresses her pain of seeing Abhi in jail.

Meanwhile, Alia confronts Gaurav for targeting Abhi. He assures her that he will free Abhi but only after Pragya asks him for help. When Alia questions his plan, he reveals that he possesses proof of Abhi’s innocence.

In the latest episode of Kumkum Bhagya,  Tanu mocks Gaurav for believing that he will succeed in his plan and warns him that Pragya can go to any lengths to save Abhi. At the police station, the lawyer informs Pragya that Abhi’s appeal for bail had gotten rejected, whereas Abhi keeps thinking about Pragya’s words.

Pragya returns to Abhi and asks him if somebody was there at the renovation site other than him. She then airs her suspicions about Gaurav and tells Abhi about his phone call. She blames herself and tells him about the rejected bail appeal.

Abhi consoles Pragya and gets honest about his feelings. Later, Pragya goes to Gaurav’s house and asks him to be honest. Gaurav makes it known to her about the evidence he possesses and demands the majority of Pragya’s business in exchange for it.

While leaving, Pragya discreetly checks her phone to see if everything was recorded well. However, Gaurav pulls out a gun and at gunpoint, demands Pragya to hand over the phone. He deletes the video but an undeterred Pragya leaves with a warning.

A nervous Subhash opens the door when Pragya keeps banging it. She confronts him and warns him about having to pay for crimes. A flustered Subhash wonders what made her confidently say so.

At the lunch table, Rhea keeps making cryptic comments about Prachi and Siddharth, but an unsuspecting Pallavi begins to praise Prachi’s efficiency regarding her job. Later, Pallavi asks Ranbeer to accompany her as she needs to sign a few documents for the foundation.

Alia gets worried about the fact that Gaurav will not help Abhi, while Tanu remains confident that Pragya will give up her wealth for Abhi’s sake.

However, she is left shocked when Alia informs her that Pragya has refused Gaurav’s terms. Meanwhile, Pallavi’s words about Prachi keep ringing in Rhea’s ears.

What will happen next? Watch more stories and updates on Kumkum Bhagya here.